The S Belt Line reconstruction project is officially underway! The project, which runs from Southwestern to IH-635, includes pavement replacement, intersection improvements, sidewalks, streetlights, and more to get this 35+ year old road back into tip top shape. It is estimated that construction will be complete in summer 2023. View the interactive construction project map. 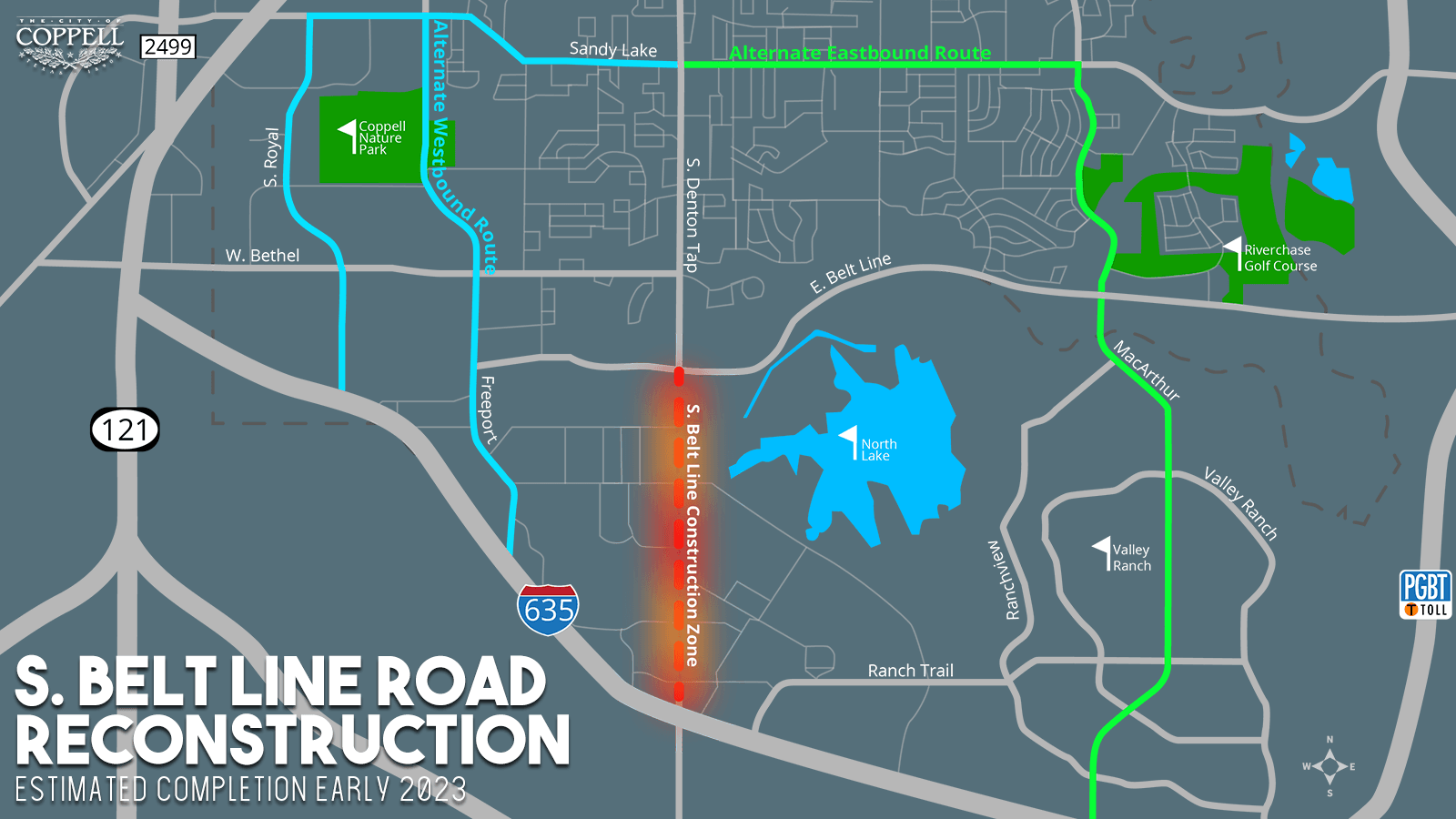 Phase 1: All traffic was diverted to the northbound lanes (east side), allowing for one lane in each direction, plus a center lane at intersections for turning traffic. The southbound lanes (west side) were closed.

Phase 2: Phase 1 was completed in early November 2022 and traffic was diverted to the southbound lanes (west side), allowing for one lane of traffic flow in each direction, plus a center lane at intersections for turning traffic. The northbound lanes (east side) are currently closed.

Seek alternative routes and avoid the construction zone! Travelers on the western side of the city should use IH-635/S Royal Lane or IH-635/Freeport Parkway. Travelers on the eastern side of the city should use MacArthur Boulevard. Commuters are also encouraged to detour to surrounding highways and tollways to avoid the area. For example, drivers can utilize SH-121/Sam Rayburn Tollway or take Sandy Lake Road to President George Bush Tollway.

The City of Coppell has partnered with Texas A&M Transportation Institute to communicate real-time travel information to an easy-to-follow Twitter account. Travel time information is automatically populated, and important updates will be communicated through this account. Follow us @coppellbeltline to stay up to date!

Additionally, the City is using road signage and other official channels to communicate updates.

The approximate $18.6 million project is funded through bond proceeds and is expected to take 16 months to complete. The City’s initial estimate for the project was approximately $24 million. After going through an extensive value engineering process, City engineers were able reduce the expected project cost while preserving trees and ensuring continued safety throughout construction. The value engineering process also resulted in a reduction in the number of planned construction phases, which shortened the timeline for construction.

The Coppell City Council approved a contract with McMahon Contracting for the project. McMahon has performed several projects for the City and has a proven track record. They served as contractor for the Airline Drive reconstruction project, which was completed early!